skip to main | skip to sidebar

Welcome to The Blogosphere Home of The Cheese Snob. If you would like to know more about who I am and what I do, I recommend you check out my Website, www.cheesesnob.com

How To Wrap Cheese

Melissa wrote in asking about wax paper. Specifically, can wax paper be used to wrap cheese.

This question brings me to one of the greatest points of contention and causes of anxiety in the cheese world: how to wrap cheese.

Most Cheesemongers are rather stoic when it comes to plastic. "No! Don't wrap in plastic!" they say. And with good reason. But most Cheesemongers, working in a retail setting, wrap their cheeses in plastic for the display case, or in backstock. When they cut to order, they may not wrap the piece they hand the customer in plastic, but look around: plastic everywhere.

Plastic is evil, albeit a necessary evil.

Plastic is not good for cheese because it seals the cheese in an air-tight environment, thus not allowing for any gasses or moisture to escape. Cheese is a living thing, and it's very important for living things to breathe. With some cheeses it's not a huge issue, but with most cheeses it is. Any cheese with a natural rind, a bloomy rind, a washed rind, and most blues will get icky being in plastic for too long. Goat cheeses, especially those chevres with the crinkly rind, get absolutely disgusting when wrapped in plastic. Fresh goat cheeses get yucky, too.

Even with hard cheeses, the surface sitting next to the plastic will taste like plastic (to someone with a sensitive palate, at least), because the cheese absorbs the chemical aroma and flavor off-gassing from the plastic. When I buy cheese to order, and the wheel is wrapped in plastic (as it usually is), unless I've just seen another piece cut from that very wheel, I will ask the Cheesemonger to trim a slice from the cut surface that's been next to the plastic before cutting my wedge.

So why is plastic necessary? Because the cheese will dry out. Unless the cheese shop has enough bell jars to house each cut wheel, the cut ends do need to be protected from the air, which is often not humid enough to properly sustain the cheese. (Cheese needs humidity.) Also, customers have this funny idea that they have to see the cheese before they buy it. Can't blame them, I suppose.

So when you get your piece of cheese home, depending on the shop, it may be wrapped in plastic, French cheese paper, butcher paper over wax paper, or stuffed into a zip-lock plastic bag.

What is French cheese paper? It's a double-layered wrapper made for wrapping cheese, and it comes from France. Last time I checked, the French still rule the cheese world. Don't argue, you know it's true. Anyway, the outer layer is thin paper, usually with some nice pictures printed on it, or the logo for the cheese shop. The inner layer is very thin plastic with microscopic holes. This allows the gasses and a little moisture to escape, but not so much that the cheese dries out. It's genius stuff.

Wax paper is a fine wrapper for cheese, but it lets too much moisture out, so it needs another layer of heavy paper or the plastic bag trick.

And that's about that for now.

Wendy, that is the best and most explicit summary of cheese wrapping that i have seen since the disappearance of Liedrekranz.

Wendy:
Thank you so much for explicating with both precision and humor the protocol for proper cheese wrapping. It has helped so much with some of my research.

In all manner of culinary creations,
Melissa

Thanks! But I forgot to mention one important thing: keep all cheese, no matter how you wrap it, in the fridge's vegetable drawer! Remember what I said about humidity? Well, the veg drawer is the warmest and most humid place in the refrigerator. If your fridge has a cheese drawer, don't put cheese in there. Store film or nail polish, but no cheese in the so-called cheese drawer. It was created by people who know not a damn thing about cheese or the proper way to store it. Trust me. I'm the Cheesemonger.

I'm so glad I found this blog entry, as I've been wondering about the proper way to wrap cheeses for sometime now. As it turns out, I've been wrapping my cheeses pretty close to the ways instructed in this blog, but it's very helpful to read detailed instructions directly from an expert. Thank you! 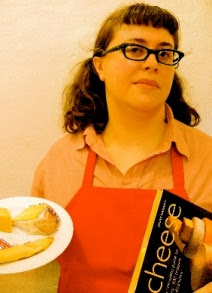